Congratulations to our MEDfOR students, Michael Boateng from Ghana and Anand Babu from India, who defended their thesis on the 25th October!!

They both did their thesis in the University of Tuscia: 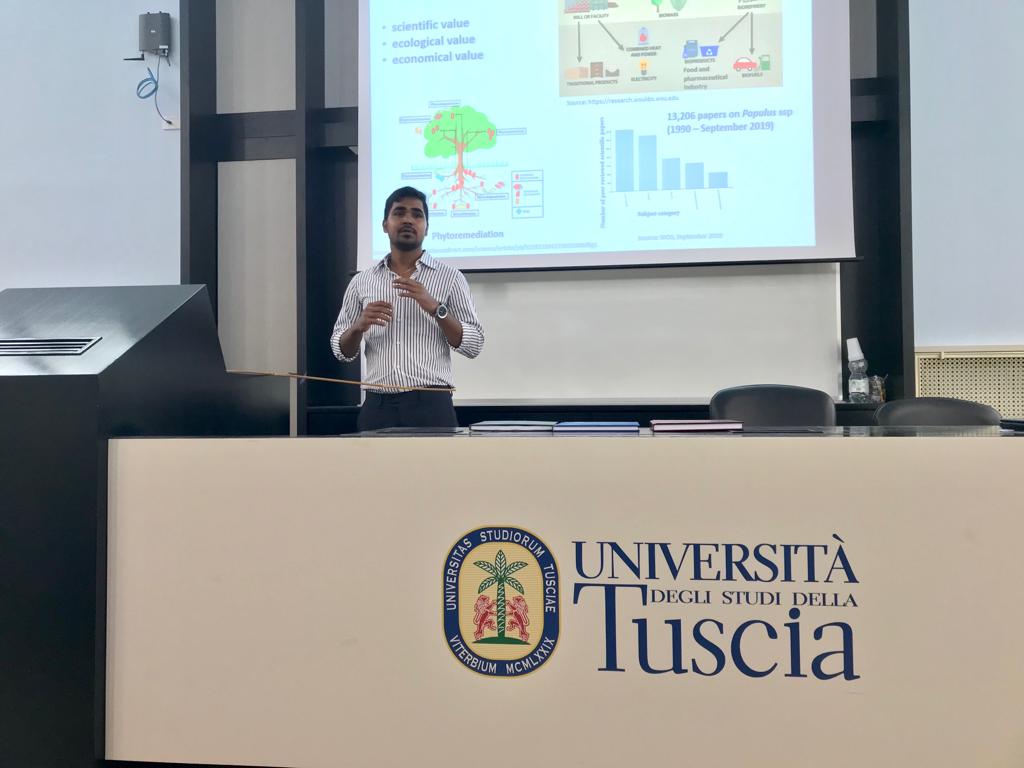 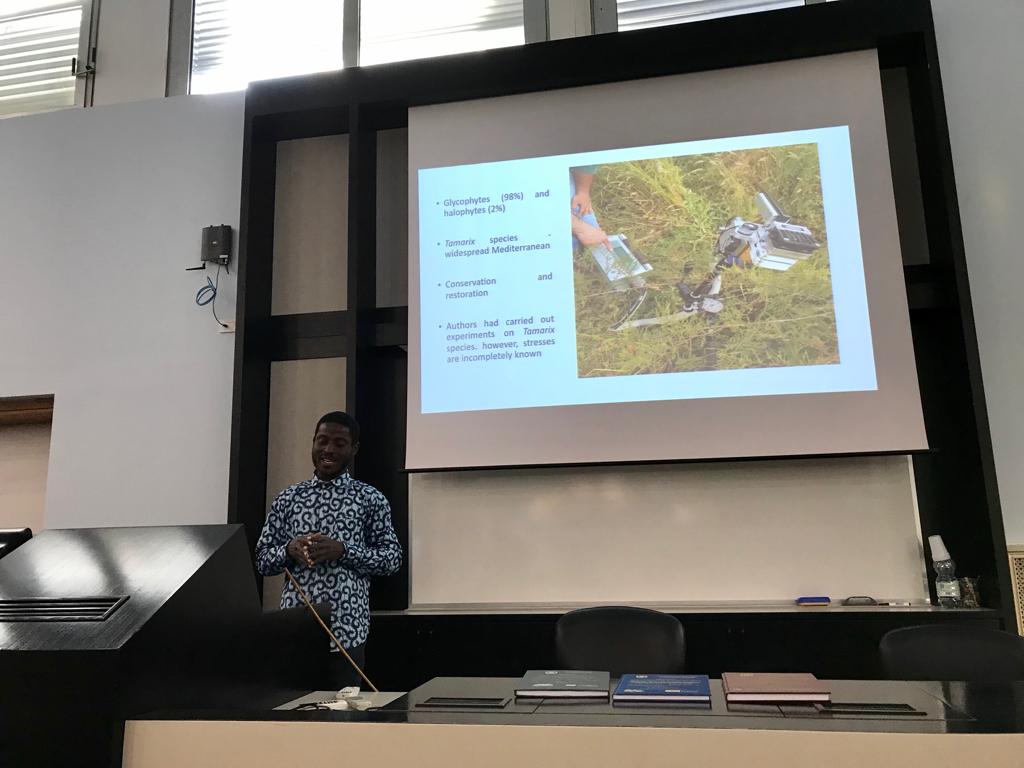 The global forestry industry, after having experienced a market recession in the last ten years, has now turned its vision towards integrated biorefinery. New models and business strategies are constantly being explored to reinvent the global wood, pulp/paper, bioenergy, food, and pharmaceutical industry through the sustainable exploitation of resources. In this way, poplars are important forest species due to their noble characteristics to fulfill the current needs of a growing population. Poplars are considered as the fastest growing tree under temperate zones. Short rotation coppice (SRC) plantations are well known during the XX century, which will be perfectly suitable to poplar species due to their fast juvenile growth. The main aim of this work is to characterize and identify, among poplar species, those genotypes that will couple bud production with a higher concentration of pharmacologically bioactive phenolic compounds. In this way,the use of short rotation coppice system can be beneficial to produce buds and other raw materials for the pharmaceutical industry and biomass for energy. In this study 48 different poplar genotypeswere selected for preliminary chemical characterization by using Near Infra-Red (NIR) spectroscopy. Four Populusnigra genotypes (“Poli”, “58-861”, “810-93” and“74.00”) were used for the estimation of total biomass and bud production that, in average, ranged from 3.82 to 10.91 ton ha-1 and 21.96 to 145.29 Kg ha-1, respectively. ANOVA showedlow significant variance for average biomass productionand medium significant variance for average bud production between the four analysed genotypes. EtOH:H2O (70:30) extraction was used for the extraction of bioactive phenolic compounds from P. nigra and P. deltoides genotypes. 1H NMR spectra results showed similar results for P. nigra bud extracts and sprout exudates. Total Phenolic Content (TPC) results showed significant variance between the four P. nigra genotypes but there was no significant variance between the fourP. deltoides genotypesanalyzed. Genotype “Poli” (smaller buds) has a high concentration of phenolic content (107.64 mg (GAE)/g) whereas genotype “810-93” (maximum bud length) has the minimum phenolic content (61.64 mg (GAE)/g). According to Devappa et al., 2015, more than 160 phytochemicals from Populus species have been identified. However, their natural role in plants has yet to be discovered. Most identified phytochemicals have potential pharmaceutical applications compared to other industrial uses. The symbiotic existence between the forestry and biorefinery pharmaceutical industries could open new trade routes for the development of a sustainable green bioeconomy.

Abtract
In recent times, one of the starring abiotic stresses for plant survival in the ecosystem is salinity. This has resulted in massive loss of habitat, biodiversity, native vegetation and water resource value. Halophytes form 2% of plants and can tolerate 200-1000 mM levels of salt concentration. Among them comprise Tamarix species which have been reported to be highly tolerant to salinity, occupying coastal dunes and the riverbanks of Southern Italy. They are used in the conservation and restoration practices under the perspectives of global climate changes. Different authors carried out experiments on Tamarix species, however their tolerance to salinity stresses is incompletely known or few studies reported. To address this gap, this thesis analyses
the salinity tolerance in different provenances of Tamarix africana and Tamarix gallica available in the EcoPhysLab in-vivo collection. Here, we analyse the growth
and physiological responses of Tamarix africana and Tamarix gallica of two Italian provenances (Simeto and Basento) over time across saline treatments (control, 200 mM,
and 550 mM). The finding of this study showed treatment effects on Tamarix species for cumulative
shoot length, dominant shoot length, stem diameter and harvest biomass in both Basento and Simeto provenances. The study shows that under control treatment, Tamarix africana had 5.2% average leaves biomass and 2.3% wood biomass more than Tamarix gallica. On the other hand, Tamarix gallica had 13.4% average leaves biomass in moderate salinity and 27% average wood biomass in high salinity more than Tamarix africana. Furthermore, Tamarix gallica had 7.5% average root biomass in control and 13.5% average root biomass in high salinity more than Tamarix
africana. Under moderate salinity, Tamarix africana had 2.5% average root biomass more than Tamarix gallica. The study also indicates that Tamarix gallica had the ability to resist high saline stress as compared to Tamarix africana. Furthermore, the study also revealed physiological decline of Tamarix species in both Basento and Simeto provenances over time across moderate and high saline treatments.

At the end of the experiment, the average quantity of salt accumulated outside the twigs of Tamarix species increased from 31.05 mg/g in control, to 112.21 mg/g in moderate and 169.24 mg/g in high salinity treatment. Under control, Tamarix gallica salt accumulated outside the twigs was 39.8% more than Tamarix africana. Similarly, in moderate salinity Tamarix gallica salt accumulated outside the twigs was 25.0% as well as 9.7% in high salinity more than Tamarix africana. The results of the study provide additional information about the intrinsically fascinating Tamarix africana and Tamarix gallica at both Basento and Simeto provenances in Italy as well as new insights for the conservation and restoration of potential fragile ecosystems, such as those occupied by Tamarix species. This ability has increased potential in a world where the human population are still increasing and land use practices and changes from the climate are likely to lead to increased salinization of the land surface in many regions.